We had Leo’s first Birthday party last week. Joel’s parents kindly let us host it in their back garden, allowing us to invite more than the five guests we’d squeeze into ours. They cooked and did most of the preparation, I bought the cake and expressed opinions on where the bunting should be hung.
It was a wonderful afternoon, I discovered a love of Pimm’s and Maia a love of drawing on people’s faces in scented pens. She spent a vast chunk of time adorning a grown man’s head in detailed illustrations. He looked like some kind of weird circus performer meets drunken stag do consequence. Toddlers hopped on and off the bouncy castle and adults abided by our handmade “NO ADULTS ALLOWED” sign. Which was difficult for some. Leo had a whale of a time crawling around the place, meeting some loved ones for the first time. The mood dipped slightly when we all sang Happy Birthday. I was all ready with Colin the Caterpillar and as the song ended he burst into tears, quite dramatically, clearly distressed. It was all a bit much. No one likes being serenaded.

From one celebration to another, I dragged the boys to their first Filipino party at the weekend. My mother, her best friends and a platter of food they couldn’t eat. (Joel has recently taken up veganism though is reluctant to commit to calling himself “a vegan” for fear he should fall off the wagon, so tells people he is merely “trying veganism”.) This is all well and good but sadly Filipino cuisine is largely meat and fish, tricky for a vegetarian let alone a vegan. I advised him to avoid the dining room where it was hard to ignore what I thought was an entire roasted pig on the table, but turned about to be a rather substantial chunk of lamb. Neither of us went near it. We stuck to our vegetable pancit. He said nothing as guests heard of our family’s unusual dietary choices and joked they’d been feeding Leo cuts of lamb. This was not amusing.
“I didn’t realise they were joking!!” Joel blurted out on the way home.
“I would never have let that happen!” I replied.
(Our son is strictly vegetarian.) Maia on the other hand devours parma ham as if its a normal accompaniment to every meal. It wouldn’t be a Filipino gathering without karaoke, which I have been well acquainted with over the years, having been dragged to dozens of these get-togethers myself as a child. I have many happy memories of Summers in The Philippines, staying up till the early hours with my family, all crowded around the karaoke. It’s sink or sing. You have to embrace it, otherwise they’ll detect your shyness and put the spotlight on you all the more. Even Leo had a go. Though he was more intent on consuming the microphone. I hogged it, working my way through the classics. My Mum sang and danced with her friends like the old days, laughing endlessly and posing for photos.
We ate purple Ube cake, belted out a duet to The Human League and politely declined about 15 offerings of alcohol. (I barely drink and he was driving.) It was Joel and Leo’s first insight into my Filipino heritage. Lamb jokes aside, I think it went well. 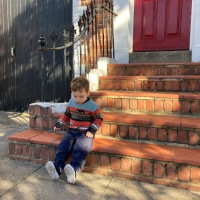